Friendly to the mobile crowd

Today, I saw that Google had a test for web masters to see if their site is mobile friendly (see Mobile-Friendly Test). So, I decided to give it a try. Here is the result (after a minor adjustment to the HTML).

So, the bot sees the site as mobile friendly (at least, the first page; that is, until I propagate the minor change). Well, I was happy to see that since I spent a little time last summer redoing the site using CSS. There are reasons for this, interim, choice. See the Content Management discussions.

Even though I know about the growing mobile usage, I have not dropped into that realm (of people with their noses tied to a device as a bull is to a rope to its nose ring). What, pray tell, requires 24/7 attention that is more important than the reality in which we are embedded (thanks, managers, you, with your addiction to the Blackberry devices – which became a red badge of belonging’ness, importance and what not – we are talking almost two decade’s descent into idiocy).

Well, let’s back up here.  So, the TGS, Inc. site met this test. Yet, for several sites that I use, regularly, their conversion to mobile-friendly made the site unfriendly. Why? We can talk this as needed.

Yes, I will get mobile here soon. God help me to refrain from the nose to the device stance that would be flattering if the content being seen were substantially deep (all sorts of interpretations here).

Ever heard of mindfulness? One youngster said, that is not of this culture. But, esteemed schools are starting to add this into their study mix. To me, the device is more of an attention drain than not.

But, then, who can stand in the way of progress? Our bit? Talk the truth engineering aspects and use Thomas/Margaret’s lives as a model from which to learn.

Post note: So that the tone might be understood, here is a little background. If you go back, about two decades (and definitely before), those who were managers would not touch a computer. No, that was for their secretaries (until the middle layer of manager lost their clerical help – or, worse, had to share). About then, some of the forward-looking managers were getting into their systems (with keyboard and monitor hidden away; cloaked in oak). After the 2000 mania (yes, all sorts of projects and worryings went on, dealing with the expected outcome of date processing running awry), we got to where managers (all ilk) ran around with their little devices, keeping in touch with chat, email, etc. Too, the head honcho kept the lower managers under his/her thumb with these little devices. What turned out was that people could never get away from their jobs (and a number of other bad things). Well, come forward, and we found these devices everywhere and in the hands of everyone. In the early use, the device meant some type of status (earlier, we had the pager – hey, look at me, I’m tethered and important). At least, that use was for business purposes (how much of it was monkey business?, again, how much necessary beyond the feudal impulses of the top-level people? – oh yes, we own you body and soul).  Now, the use of the attention detractors are probably for the most idiotic of reasons. Ah. Then, you have people driving with their noses clamped to these things. …

Again, 04/25/2015 — Could not resist. This blog, itself, where I reported the mobile-friendliness of the main site is itself a mobile’s friend. 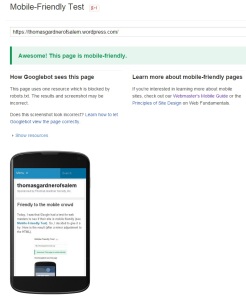